skip to main | skip to sidebar

summer's not the best time...

...to sit indoors and blog. Now that it's Autumn, I'm getting the itch to blog again, but I'm taking a temporary break over at my current online fad, Tumblr. I'll be back at Blogger when it's time for a change of scenery again!
Posted by anth0logy at 7:12 PM No comments:

It's the summer solstice... the longest day of the year... and actually, it's my second 'longest day' of this year.

Six months ago, I was in Paris in the northern hemisphere, and it was the Fete de la Musique... a city-wide fresh-air music festival that brought the whole city out to enjoy a huge range of live musical performances on seemingly every second street corner. I loved it so much that I even stopped and listened to reggae :-O Gotta get back there soon.
Posted by anth0logy at 2:35 PM No comments:

And speaking of WikiLeaks, I'm more than a little mortified by the international conspiracy to get Julian Assange extradited to the USA to be 'Gitmo'd' by the American right-wingers!

The UK, Sweden, Australia... all seem to be complicit in this outrageous attempt.

Let's hope that democracy can win out and get Assange out of their hands, because the politicians running our 'democracies' sure don't seem willing to help.
Posted by anth0logy at 8:41 PM No comments:

What do you call someone who secretly reports back about his own government to a foreign power?

Yes, it is an 's' word, but in Australia, apparently, it's 'Senator', as in Senator Mark Arbib, rather than the more common term, 'spy'.

In many countries, not only would people like Arbib be treated as spies, but their acts of deceit would be viewed as a crime, and a serious one at that - treason.

How can anyone ever again trust Arbib, or the others named in WikiLeaks (such as my 'hometown' member Michael Danby), to have a say in the running of our country, when their loyalties are clearly shared with a foreign nation? They should resign in shame, or be kicked out of parliament.
Posted by anth0logy at 8:33 PM No comments:

relief at last
Posted by anth0logy at 8:05 PM No comments:

Never over-estimate the intelligence of the Australian electorate.
Posted by anth0logy at 9:54 AM No comments:

One of the best from the Chaser... Libra-L

misterabbitt talking about the kettle 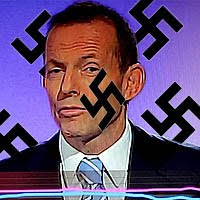 I just heard Tony Abbott on the telly accuse the *Labor Party* of running a fear campaign during this election!

The man who wants us to believe that we are about to be overrun by a tidal wave of boat people, even as we drown in a sea of government debt as a result of our sinking economy! While he stands up for 'realection' and promises to cancel everything and return us all to the dark ages.

I hope I get to see this lying little ferret buried at the polls on the weekend.

... and in the meantime, I'll content myself with watching him squirm as he tries to avoid Kerry O'Brien's questions on the 7:30 report. What a sleazy, untrustworthy dog. I don't know how O'Brien can stand to listen to his lies and waffle... I feel like grabbing his throat thru' the tv screen! :-P
Posted by anth0logy at 7:04 PM No comments: 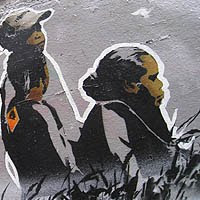 I'm a relatively late convert to the merits of graffiti.

That's largely because it's taken me a long time to learn to differentiate between graffiti ART and graffiti VANDALISM (aka tagging) (and possibly that's partly because the vandals often manage to tag the art as well).

Now that I've learned to chill out about the existence of graffiti *in appropriate locations*, I find myself looking out for it and enjoying a good graffiti display as much as I would any art gallery exhibition.

I was especially pleased to find the terrific display in Union Lane in the city last weekend. Dunno when it got there, but there's a some excellent works on the walls of the lane now, and it's well worth checking out (in the daytime - it doesn't look like a place to be in after dark!)
Posted by anth0logy at 5:48 PM 1 comment:

Another current favourite YouTube clip, the kids from Glee performing an old favourite, To Sir with Love. I remember loving the movie (and the theme song, by Lulu) when I first saw it, whilst I was in High School... some time last century... 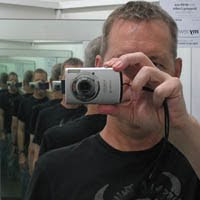 "All my life I spent my money on comics, movies, travel... the rest I just wasted"